This is the latest status of my itinerary as I have originally planned it in August 2011 and re-planned it in January and July 2012. It might continue to change in the course of the year I’m travelling. My journey started in Oct 2011 in Cairo and is planned to end in Jan 2013 in Panama City. I will jump between continents (Africa, Asia, Central & South America) several times to make the itinerary optimal for what I want to see and experience (e.g. leaving Africa to be in Rio de Janeiro for Carnival). All major travelling will be done with Dragoman which is an experienced overland adventure tour operator from the UK. Exceptions are the Kilimanjaro hike and my Central America trip which I do with Intrepid and the Southern Africa trip which I do with Tucan. I was already travelling with Dragoman in 1995 (Nairobi to Accra) and 2009 (Buenos Aires to Lima). A few years back, I was also travelling with Nomad, another overland tour operator, from Cape Town to Victoria Falls and with Contiki from Sydney to Cairns and Alice Springs to Darwin. Therefore, I have already a pretty good understanding what overlanding means and what is ahead of me.

I will start my journey in Cairo which seems to be the perfect starting point for a year long journey around the world. After visiting the ancient sites of Egypt (Giza Pyramids, Karnak Temple, …), I will follow the Western desert oasis route into Sudan. I’m a bit afraid of the ongoing conflicts in this country, putting it on the list of the 10 most dangerous countries to visit, but having survived a journey to Congo and Central African Republic, makes me optimistic that everything will go well. I will anyhow avoid the conflict zone around Darfur. Continuing my journey to Ethiopia, I’m looking forward to a trekking tour in the Simien Mountains. Interestingly my neighbour plans to travel to Ethiopia during the same period, so I might run into him. In Kenya, I will do a safari in the Samburu National Reserve which is a more rarely visited and maybe more natural game park. 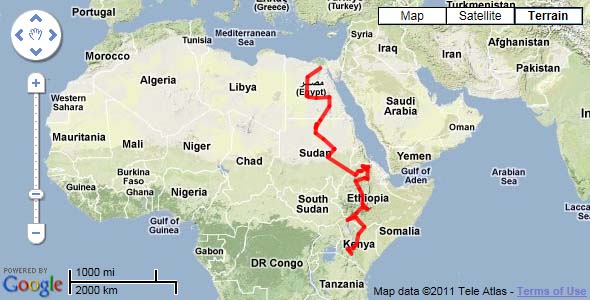 It’s one of my biggest dreams to climb Mount Kilimanjaro and it will come true during the Christmas holiday season. I will choose the easiest route to the top which is Marangu Route, also known as the Coca-Cola route because no specific mountain climbing skills are required. But as you can imagine, climbing 5,895 metres or 19,341 feet is far away from being easy and requires some degree of physical fitness. I have no doubt that I have this fitness but I have great respect of the altitude which could limit myself and force me to return a few metres before the top. The maximum altitude I have experienced so far is approx. 5,000 metres in the Andes (Peru, South America). During this trip I was experiencing severe signs of altitude sickness (vomiting, shortage of breath, weakness, rapid pulse) that I thought I’m going to die… However, I will give it a try to reach Uhuru Peak but will for sure return in case I experience any severe signs of altitude sickness. 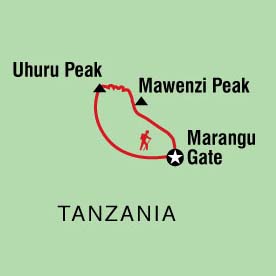 My South American journey will start in the jungle city Manaus from where I will travel by boat on the Amazon River until I hit the ocean. I will than follow the coast line all the way down to Rio de Janeiro where I will spend the whole carnival season from Feb 17th to Feb 23rd. I hope I will be still alive after partying for several days in a row… I will further continue to the Iguazu Falls which are with 2,700 metres or 8,858 feet length the widest waterfall in the world. In my next destination Buenos Aires I would like to take a tango lesson as I did already in 2009 before heading further south to Ushuaia the southernmost town in the world. From here you can also undertake a boat cruise to Antarctica which I will for sure do at a later point in my life. My final destination on the South American continent will be Santiago. 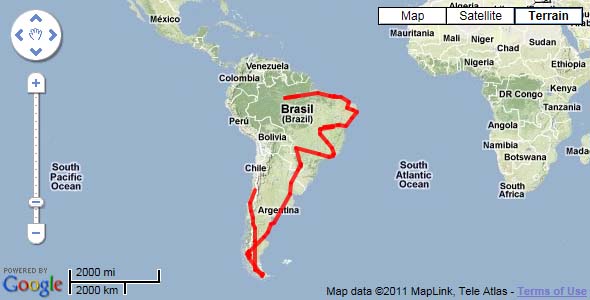 This is not the classical journey people might think of when travelling to Asia. Most people prefer to travel to South East Asia, India, China or Japan where I have been as well. This time I will choose a different route and travel through the heart of Central Asia to discover forgotten countries like Turkmenistan, Uzbekistan, Kazakhstan and Kyrgyzstan. I’m looking forward to discover the hidden treasures of Iran and experience how it feels to wear a headscarf all day which all female travellers are requested to do. Actually, how do a best tie a scarf around my head? I might consult a Turkish shop in my home town on this matter… I’m also excited to see the colourful markets of Ashgabat and Tashkent, sleep in a traditional yurt and finally travel along the Northern Silk Route to Beijing. 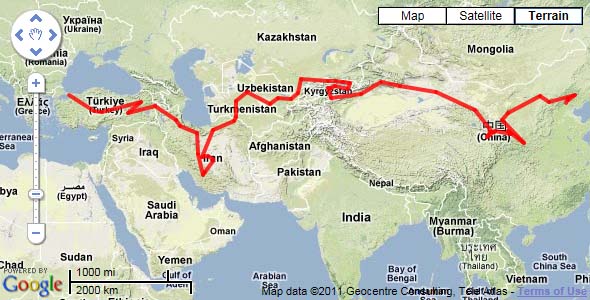 Originally I didn’t plan to go to Mongolia but to Tibet thus travel from Xi’an to Kathmandu. I was looking forward to travel across the Himalaya, the “Roof of the World” and visit the Mount Everest base camp. However, for all travel in Tibet you need a permit which is issued by the Chinese government. These permits were not issued when I was planning to go in summer 2012 since some Tibetan monks have burned themselves in front of a temple in Lhasa. Therefore, I have re-planned my trip and go to Mongolia instead. Traveling in Mongolia will take me to some of the remotest places on earth. For three weeks I will be camping or stay in yurts in the middle of nowhere with no shower, bed and access to electricity or internet. This is overlanding at its best and I’m really looking forward to this basic life. 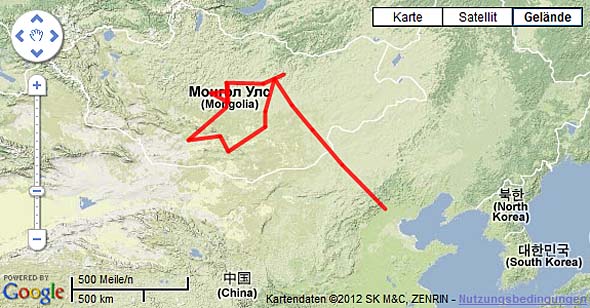 After finishing my travel in Mongolia I have two weeks before I will head off to Africa. So I had a look on the map what are interesting places close by and found South Korea. According to my guidebook there is a lot to see and do in South Korea and I was tempted to get myself a packed schedule. I was also tempted to spend some time with monks in a Buddhist temple. But in the end I decided to have a vacation from my travel and take it easy. Therefore I will spend seven days relaxing on Jeju Island and four days sightseeing and partying in Seoul. I also plan to do a day trip to the demilitarized zone with North Korea to put my feet on North Korean ground.

Since I was originally planning to travel from Xi’an to Kathmandu I had already booked a flight from Kathmandu back home. When my Tibet trip got cancelled I looked into the possibility to go on a two week hike in Nepal. However, I found out its monsoon season at this time of the year and when hiking it will be foggy, muddy and not much fun. Therefore, I will spend two weeks in South Korea and only four days in Kathmandu to absorb the atmosphere of the city and then catch my original flight home.

Africa, I’m back! After I travelled from Cairo to Nairobi at the beginning of my current overall journey, I will return to Africa to continue my travel in the southern part of the continent. Originally, I was planning to travel from Nairobi to Victoria Falls which would have been the missing link to complete my journey from Cairo to Cape Town since I did Cape Town to Victoria Falls on a previous journey. However, my Nairobi to Victoria Falls trip with Dragoman got cancelled why I sought for an alternative and found Tucan to take me from Johannesburg to Dar es Salaam which partially covers what I was originally planning to do. However, this will not make my Cairo to Cape Town complete since I will miss one day drive from Marangu (Kilimanjaro) to Dar es Salaam of 550km or so for which I will need to return at some point in time. Regarding the trip itself, I’m looking forward to game driving in Chone National Park, the amazing Victoria Falls and the island of Zanzibar where I might do some kitesurfing and diving to discover Africa’s east coast under water. 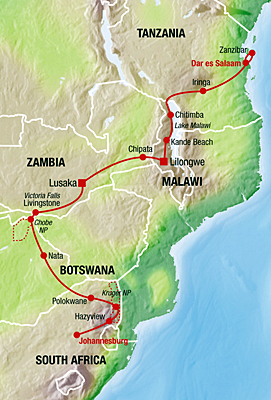 I will start this trip in Lima, the capital of Peru. I have been to Lima in 2009 where my overland journey from Buenos Aires to Lima ended. With this trip I will continue where I stopped last time. In Peru I will go north and spend a couple of days at the beach. I will than head towards Quito in Ecuador and discover the Amazon Jungle. There are lots of activities in this region such as mountain biking or white water rafting and for sure I will do some of them. Finally, I will head to Colombia were I will spend a night on a coffee plantation and enjoy the richness of the rain forest. Heading further north from Cartagena to Panama City overland is impossible since the Pan American Highway doesn’t go through the Darién Gap region. There is simply no road and so I will jump on a plane to Mexico City and travel from there to Panama. 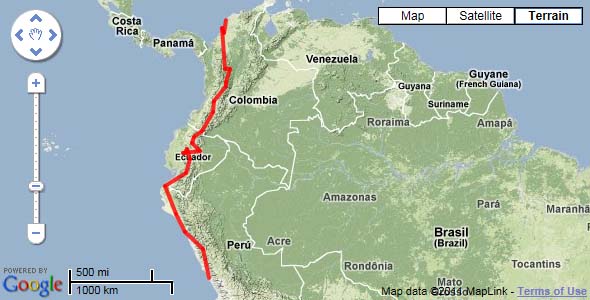 Although I have already travelled a lot during the past years, Central America (with the exception of Trinidad and Tobago in the Caribbean Sea) remained a white spot for me which will definitely change with this trip. Instead of going to touristy places like the Dominican Republic or Jamaica, I decided to travel through less visited countries like Nicaragua and Honduras. For this trip I will also change the type of transport, meaning instead of travelling with an overland truck I will use local buses and boats to get around. I’m really looking forward to discover the Mayan ruins, to climb volcanos and to chill out on the beaches. I also hope to find some good spots for watersports such as diving, windsurfing and kitesurfing. Do you know any in the area? I plan to end my journey with an amazing New Year’s Eve celebration at the beach of Panama City saying goodbye to this great year of travelling and return to civilization…

Linen Theme by The Theme Foundry